All of my packages have been wrapped and placed under the tree. The tags for this year's presents were made using the Ranger No. 8 tags which were decorated using distress inks added with an Ink blending tool. I speckled the tags with water to make it look like snow was falling. The stamped images were coloured using distress inks and markers and the whole lot had Stickles added for a bit of sparkle. Happy Christmas everyone. 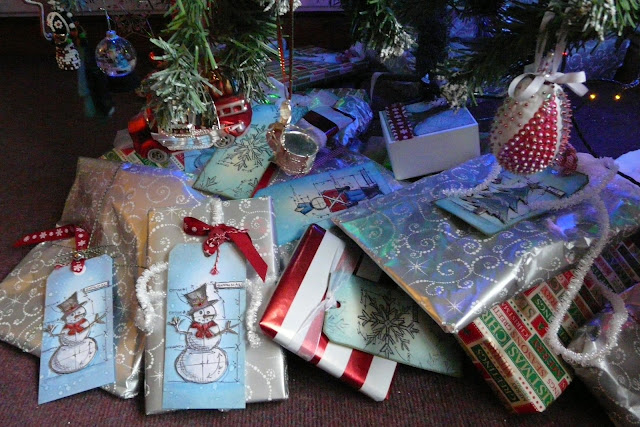 It has been a loooong time since I last blogged. I have been using Facebook to upload photos of my work recently. I find it really quick and easy and I don't have to go into huge detail. Anyway, I have decided to blog this particular project.
It is a birdhouse and has been created entirely from double-sided paper (except the little fence).

The paper that I have used is Graphic45 Nutcracker Sweet, which I got from the lovely Kate at www.createwithkate.com. I just love Graphic45 paper. The collections are so detailed, that they make creating any project a joy. The roof tiles are made up of about 160 hearts. I have edged all of  the tiles with glitter. I have agreed to do this as a day workshop in December. I hope that I haven't bitten off more than I can chew!
Posted by Paperfanatic at 10:14 AM 1 comment:

A Birthday Card for Olivia 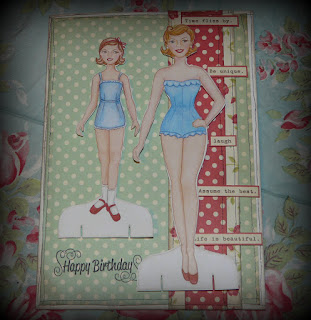 My eldest daughter Olivia will be 11 on Tuesday, so of course I have made a card for her. I have used the wonderful Cosmo Cricket Odds and Ends collection papers, a a download of old-fashioned paper dress-up dolls. The retro styling of the dolls go perfectly with the papers. The dolls are stuck to the front of the card with Velcro, so that they can be easily removed. 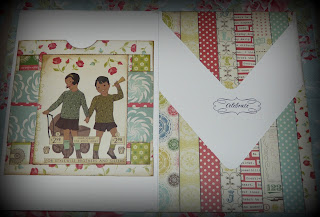 The inside of the card has an envelope which is filled with the dress-up clothes. 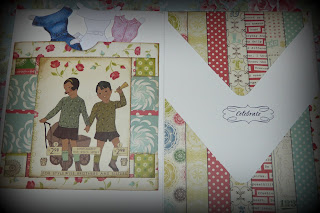 The sentiments come from a set which I got from Create with Kate. The are by TPC Studio.

Posted by Paperfanatic at 5:53 PM No comments:

Tag for Compendium of Curiosities 2 Challenge 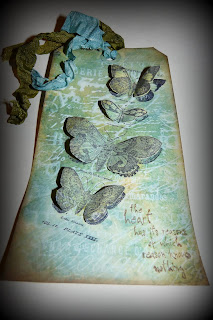 This is a tag which I have created, inspired by the technique of marbling in Tim Holtz' new book Compendium of Curiosities 2. I created the marbled background as shown in the book, I then over-stamped with Picket Fence Distress Stain. The butterflies were stamped twice, once onto the tag and again onto a piece of marbled cardstock. The butterflies on the cardstock were cut out and added to the tag. I stamped the sentiment with Vintage photo ink and edged the tag with the same ink. The seam binding was coloured using the distress stains, Broken China and Peeled Paint. Hope you like it! Most of my supplies came from the wonderful online store Create with Kate, she definitely stocks my favourite ranges of products.
The challenge is hosted by Linda here, pop by for the full details.
Posted by Paperfanatic at 3:51 PM 5 comments: 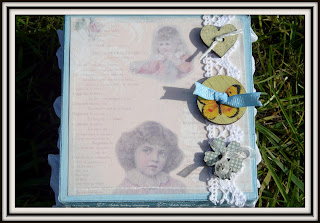 I was given 11 little wooden boxes and decided that they were perfect for keepsakes. So this is my first one. I painted the box with Adirondack Cloudy Blue paint first, both inside and out. I then covered the top, sides and insides with Melissa Frances Paper, Vintage Attic Treasures. To the lid I added some white lace and some gorgeous wooden buttons from Prima. The little flower button also has a little baby feet charm attached. 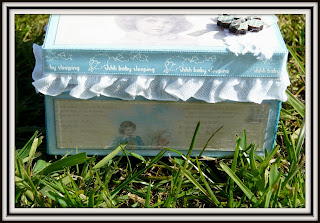 Around the edge of the lid I added some white ruffled ribbon and some blue satin with the words 'shhh baby sleeping' on it. 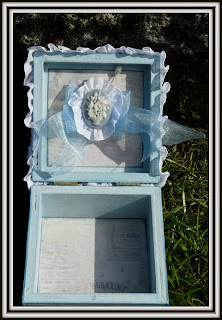 Inside the lid I have made a bow with some blue organza ribbon and added a Cameo with white ruffled ribbon behind it and a little pearl stick pin to finish it off.  I have started a pink one which I will post in the next few days. Enjoy the weekend. x

Posted by Paperfanatic at 5:36 PM No comments:

Well folks, other than the very odd post I have not blogged in ages. My camera went missing and I was convinced it had been stolen. The hubby found it last week hiding under the front seat of my car. Now I know I checked there so I really can't say where it went on holidays for the few months.


I have indeed been busy though, with a class every Monday night, some demonstrating in Cork and the new venture which I have started up with my two great friends and fellow crafters Mandy Sheridan and Betty Cumiskey. We are running crafting workshops which not only concentrate on card-making and scrap-booking, but also on a little altered art. Our first workshop was on 1st April and was a huge success. 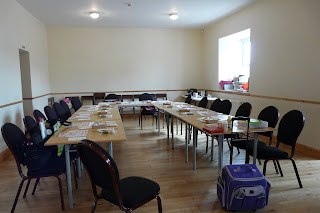 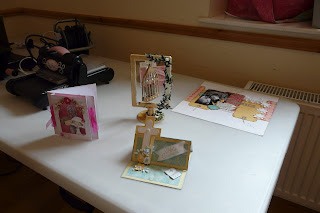 We will be travelling to Limerick on the 29th April and will be in Cork on Sunday 13th May. It's so exciting to do something new. If anyone is interested in attending the Cork workshop, please get in touch.
My first collage- Sort of! 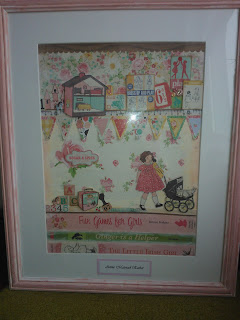 I bought the beautiful Emma's Shoppe papers from Crate Paper and felt they had to be used as an art piece rather than be locked away in a scrapbook, so, I made this collage. It is quite large (about A3). I used the book spines as a shelf to start to put the toys on. I also made a higher shelf using measuring tape ribbon and trimmed the under-side of this with bunting. 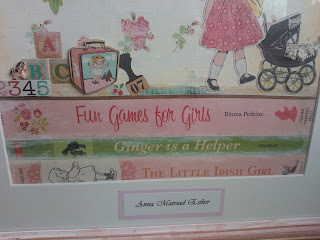 Before I had it finished it was sold! The lady who bought it wanted it for a friend who had just had a little girl. I got a large unfinished frame and painted and distressed it using red. pink and white paint and put the little ladies name on the mount. 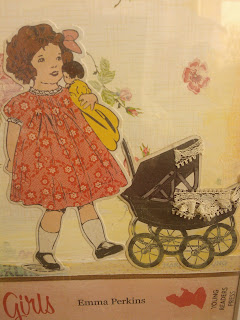 I put some lace onto the little doll's pram for some added texture, and added some buttons in various shapes and sizes.
Posted by Paperfanatic at 3:20 PM No comments:

Hi everyone. Well today is the last day of March. Doesn't time fly? To celebrate the beginning of April, Myself, Betty Cumiskey and Mandy Sheridan are holding a workshop. There are a couple of spaces left, so if anyone fancies a trip to Clonegal in Co. Wexford, drop me a line and I will send you the details and directions.
We will be doing 3 different types of projects to welcome spring. The first is a wonderful home decor piece which we are really excited about. The second is a wonderful scrapbook layout which uses vibrant K & Company papers, tags, butterflies and buttons. The third is a lovely wedding card which will use stamping, die-cutting and embossing. Depending how the day goes we may throw in a bonus card too. All of the kits are loaded with goodies and we are looking forward to a fantastic day.
Posted by Paperfanatic at 6:42 AM No comments:

Where in the world is your Vagabond 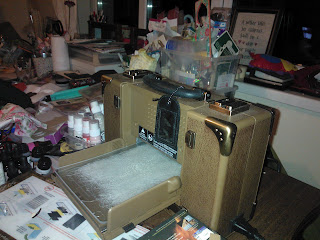 My Vagabond AKA Vernon is sitting beside my very untidy desk. He is busy getting ready for St. Patrick's Day, as we live in a small town called Carnew in County Wicklow, Ireland. I think I will have to make a special badge for him this year!
Posted by Paperfanatic at 10:39 PM 1 comment:

Demo Day at Vibes and Scribes

Hi everyone,
I haven't posted for ages, sorry. Life got in the way a bit. However this does not mean that I have been doing nothing. I have been teaching my weekly class, in Carnew. I have also to a lesser extent been creating some new projects. I am experimenting with collage at the moment and really enjoying that.

But exciting news! I will be demonstrating at the wonderful Vibes and Scribes craft shop in Cork on Sunday and for the following 3 weeks. I have raved about this gem of a shop before, but it is even better now, as they have moved all of the art, craft, fabric and trim to the Bridge Street shop. The shop is over 3 floors and has a great space for demonstrating and classes.

Come along on Sunday if you are in the area. The demo is free and hopefully you will get some new ideas.

See you there.
Posted by Paperfanatic at 12:36 PM No comments: 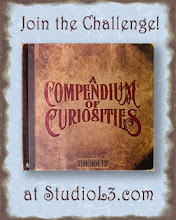 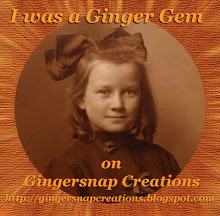